Well Zach is now the proud owner of a body that he can control! This week he has rolled over from his tum to his back and from his back to his tum. He has managed to sit unaided for longer and longer. He can drink from the sippy cup all by himself. 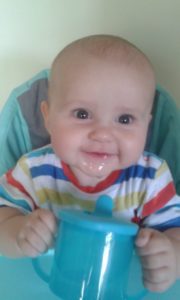 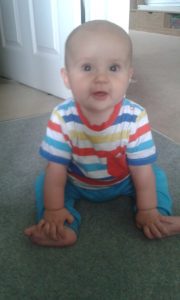 It has been an incredibly busy week with work and my mum has been looking after my grandmother so there has been no child-free time at all. Matthew and Anya have both had a good week at school and it has only required a minimal amount of bribery to get them to behave. One of Matt’s Beavers badges is trying to make a bid for freedom so sewing beckons yet again…

As you can see from my other posts this week, I have conquered another technophobic moment and produced my own YouTube videos! Which are pretty rubbish but it felt good to do something that was just for me.

Chris has had a cold for the last couple of days and now I seem to have caught it 🙁 The only good thing is that Zach thinks sneezing is hilarious. Unless it’s him doing it. That is not funny… for any of us!

Sleep has been this week’s other success. Vague recollections of Zach’s good sleeping of 8-9 hours a night from 6 weeks ago are being stirred but a staggering 5-6 hours of sleep a night and just waking up twice! Just a shame that Matt and Anya choose those nights to need a wee and leave the lights on to wake each other up or come in at 6am gggrrrrr!