So yesterday was a big family day as we were all meeting up in Gloucester so my grandmother could finally meet Zach and spend time with the rest of her great-grandchildren before returning to her care home.

It did not start well. Friday night the heavens opened all over the dried washing that I hadn’t had a chance to bring in yet 🙁 It got soaked and it was only in the morning that I realised Zach had no clean dry trousers or tops. One pair of trousers was nearly dry so I flapped them around a bit and put them on him. All ok I thought. Then he pooed ten minutes before we were due to leave and it leaked all into the trousers 😛

I rummaged around and found some 9-12 month clothes that would have to do and he looked like a 90s boy band reject in his oversized outfit. Not how I’d imagined him meeting family!

We bundled into the car ON TIME!!! (I really hate lateness) Two minutes into the journey Anya pipes up the classic ‘Are we nearly there?’. Answer: ‘No, it’s another 2 hours, we haven’t even left Blackwater yet!’.

Her next outburst was less funny as she puked 25 minutes into the trip. We then had the dilemma: to turn around and go home for spare clothes, or keep going and buy some there. Then I remembered that my sister was supposed to be bringing 3 sacks of clothes from my cousin’s daughter. We got back on thew road and I tried phoning her but she ignored me because I was using Chris’ phone and didn’t recognise the number.

Anyway, in the end Anya walked into the party wearing MY raincoat. Not how I’d imagined her arrival! Helen arrived 15 minutes later with the bags of clothes. Phew!

It was all worthwhile in the end and her is my grandmother meeting Zach: 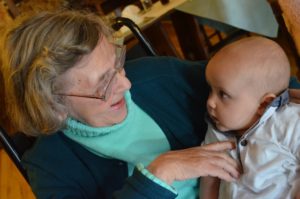