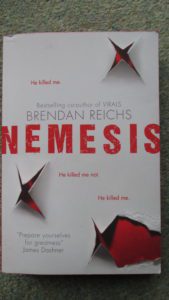 I offered to review this book but had no idea it was aimed at young adults! The cover made me think it was a normal adult thriller. Opening the package was a great surprise to find the edges of the books were bright red like blood, very dramatic and eye-catching. 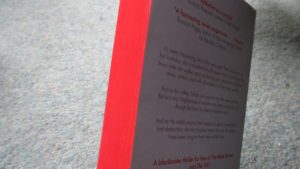 Right then, the plot and characters. We begin by being introduced to Min who has been murdered every other birthday but comes back to life again each time. Next we meet Noah who has also been tormented in a similar way. What is the connection?

Min is a lot tougher than Noah and is a fab female protagonist.

The Earth is in danger from a comet, just when they think all is safe, the teenagers spot a military presence near by and investigate. Things are not looking good.

I won’t give away what happens at the end. It was not altogether satisfying and I wonder if there will be a sequel. Noah appears to begin acting out of character, although maybe he is just responding to events. Throughout the book he wishes to behave differently but doesn’t, so I was surprised by his behaviour at the end and felt there was more plot to write about.

The style of writing reminded me of the Twilight series and The Hunger Games books. Readers of these two would definitely enjoy Nemesis.

The murders are rather graphic at times and there is other violence in the books so sensitive readers should probably be warned.

I did have some unanswered questions which were not explained by the end of the book which is why I think there is scope for a follow up novel.

This book is not published yet but not long to wait! 13th July in the UK 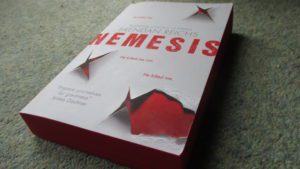 *i was sent this book for the purpose of this review. All opinions are my own.