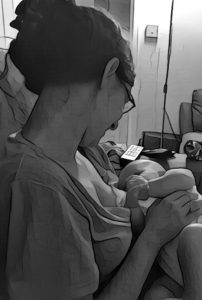 I LOVE this photo!

Chris took it one evening while I was feeding Zach and I had no idea until he showed me later. Quite simply I think it is beautiful (although I have played around with it in the Prisma app!)

I have breastfed all three of my babies, and it hasn’t always been easy. I hate the militant midwives and health visitors who do the hard sell on breastfeeding. I just assumed that it was natural and that I would get on with it. The feeling when your milk comes in is quite extraordinary and unexpected even when you’ve been through it before!

So I tried it with my firstborn. Straight after the birth Matt suckled for 45 minutes. BIG MISTAKE! Ouch… Only later did I find out from my mum that the rule used to be no more than 10 minutes at a time. I fed for hours at a time in those first days. And then he puked up blood during a nappy change. Bright red terrifying blood. We rushed to hospital and after lots of tests they determined that the blood was mine and the doctor forbade me to carry on breastfeeding. I was sent home 6 hours later with some tiny bottles of formula milk, feeling like a complete failure.

The next day the midwife visited and told me to ignore the doctor and carry on despite the blood. She made me feel even worse 🙁

I bought a breast pump and expressed milk for a few days and fed him that along with formula milk. Gradually I reintroduced breastfeeding as little top-ups and that worked perfectly until he naturally gave up milk feeds altogether. SUCCESS!

Second time around, I was ready to do the best for my daughter whether that was formula or breast. Learning from last time, I carefully kept feeds short to begin with. No blood issues this time! No, instead she got thrush in her mouth which then went in my breasts. OUCH! The health visitors wouldn’t listen to me when I tried to get help. They insisted I was feeding incorrectly and the problem was due to latching on wrong. I tried to see a doctor but was fobbed off with the surgery’s triage nurse and she agreed that it was thrush and treated Anya not me so the pain continued and Anya didn’t get better. Finally I saw a doctor who treated both of us but by this time the pain was so bad I dug out the breast pump and got to work again. I also borrowed a friend’s electric pump. WOAH that was weird and I have new sympathy for cows! In the end, I breastfed until she lost interest although I did give her a top up of formula to make sure she got all the nutrients she needed (due to my restricted diet).

This time it all started off well again but then I got mastitis and cracked nipples. I thought thrush was painful but compared to this it was nothing. The mastitis simmered along for 2 months and yet again my trusty breast pump was called into action. Now it’s all fine and healed up and Zach enjoys his feeds but also takes one formula bottle a day like Anya did.

I’m not keen on breastfeeding in public. Not because of getting a boob out (I’ve got this down to a fine art to stay discreet) but because it might reveal my wobbly tum when I lift my top up. During the summer it wasn’t too bad due to the design of skirts but my jeans muffin top is not pretty 🙁 and the public should be protected from my weird looking belly button.

Whatever you choose to do for your baby, I know you will be trying your best!