Kate returns to her childhood home when her mother breaks her hip. Her former best friend dies the next day but Kate has been haunted for a decade by the death of their friendship after a murder in the woods on graduation night. She becomes convinced that Emma was also murdered but does it link to the events of 10 years ago…?

Best Friends Forever is a psychological thriller and murder mystery set in America. Most of the book is written in the present day from Kate’s first person perspective but these are interspersed with chapters showing the night of the graduation party in the third person.

Kate ran away from her friends and family after the death on graduation night. She believes her best friend to be responsible for the murder and feels guilty about hiding the truth to protect everyone involved. Now she is forced to confront the past when she returns home to care for her mother. Her sister has been mute since that night but she hopes that their reunion can heal both their pain.

I think I suspected most of the characters of some nefarious dealings, lying and even murder. The tension builds over the course of the book as Kate deals with her recollections of the past and concerns abouts events in the present. There were lots of twists and I did guess most of them but this didn’t spoil my enjoyment as I worked through the clues alongside Kate.

Best Friends Forever has interesting and intriguing mysteries to explore in the past and present. 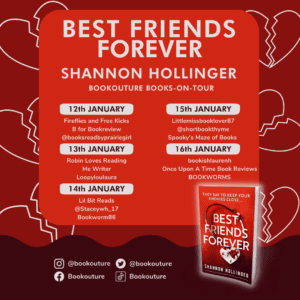 I emerge from the trees, drenched in sweat, my voice lost as I take in the scene in front of me. The blood. The body. Emma’s eyes meet mine for a second. “It was an accident,” she whispers.

Emma and I were childhood best friends. We did everything together. Until that terrible night in the woods.

I couldn’t tell anyone what I’d seen. We never discussed it, but our bond was too strong; I could never betray my best friend. Even if she had killed someone.

But I also couldn’t stay in town and watch her live a normal life, knowing what she’d done. So I left.

Now, ten years later, I’m back. The guilt and the fear have stayed with me. And I have realized I need to reveal the truth if I’m ever going to move on.

But I never get the chance. Because the day I turn up, Emma is found dead, and the way she died means I start to doubt everything I thought I knew about that night all those years ago.

As my grief turns to anger at all those lost years of friendship, I realise with horror that Emma might not have been the only killer. Someone else is out there. Someone who was close to us both, someone who knew the smallest details of what had happened back then. Who from our small town could have murdered not once, but twice? And who’s next…?

An utterly gripping and compelling psychological thriller with twists and turns to die for. If you love Karin Slaughter, Paula Hawkins and Freida McFadden, you’ll love Best Friends Forever. With degrees in Crime Scene Technology & Physical Anthropology, Florida author Shannon Hollinger hasn’t just seen the dark side of humanity – she’s been elbow deep inside of it! She finds writing to be a much cleaner way to spend her time than the autopsy suite. Most days it smells better, too.

Her debut novel, the psychological thriller Best Friends Forever, is the first of a five-book deal with publisher Bookouture.

Her short fiction has appeared in Suspense Magazine, Mystery Weekly, and The Saturday Evening Post, among a number of other magazines and anthologies, and her story Lady Killer was a finalist for the 2021 Al Blanchard Award sponsored by the New England Crime Bake. 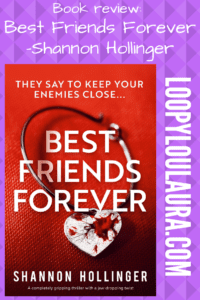