Now this is my favourite birth. I didn’t really believe it was happening and kept thinking it was going to get a lot worse.

I woke in the early hours with vague contractions but just went back to sleep. In the morning while feeding Matthew his breakfast, my parents were laughing at how I was trying not to show him I was in pain. But I kept thinking it was hours away, then it was pointed out that the contractions were coming every 5 minutes so maybe I should get to hospital.

My poor dad drove me in and as we got stuck in school run traffic, I was trying not to let it show that I was having contractions every 1-2 minutes. When I got into the labour ward I was examined and found to be 8 cm dilated. It was one of the happiest moments of my life! I started on the gas and air, full of appreciation for it this time around.

In fact, I may have chugged a bit too much on it as I started to hallucinate and was advised to stop for a bit 🙁 At which point I missed a contraction and thought labour had stopped. The midwife smirked and said ‘No, baby is about to appear!’.

Suddenly I got the urge to push! It was like nothing I’d ever experienced before (except when I had had a REALLY bad tummy bug). My body completely took over and Anya seemed to come out with very little effort at all. It was amazing and a complete contrast with Matthew’s birth. 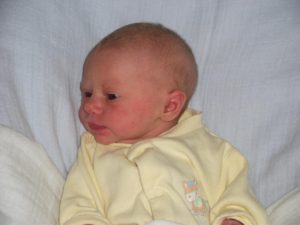 The midwife who stitched up my girl bits afterwards said she’d never seen anyone so relaxed while they were being sewn up. I replied it would probably be my last chance to rest for quite a while… 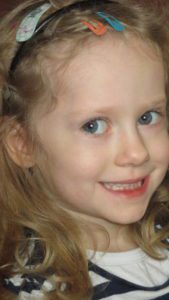