Mildred Wells has sworn vengeance on Tim Russell and his girlfriend Holly after they separated her from her son in the afterlife. Now she is ready to inflict revenge on all those who caused her suffering, both before and after her death…

We develop some sympathy for Mildred as we go back along her timeline and see her past. She and her sister and mother join a cult run by Gideon Walker who wants to learn magick. Her experiences are traumatic but she also learns magick but is put under a spell to forget. She escapes the farm and begins to have a normal life, falling in love with Thomas Pike and having a son Elmer.

From the first book in the trilogy The Patience of a Dead Man, we know that this does not have a happy conclusion, with Thomas going off to war and being killed and Mildred then murdering their son.

At the end of the first book, we discovered tht Mildred was not a ghost but a revenant: someone dead, programmed for revenge. Now that she has been eternally separated from her son, she searches for Gideon and the other revenants before turning her attention back to Tim and Holly.

Dead Woman Scorned is very different to The Patience of A Dead Man. There are flashes of sympathy with Mildred and an understanding of her motives. However there are fewer spooky moments as we see her planning to destroy other characters rather than appearing suddenly.

Now that the ghost element has gone, this book still sits firmly in the horror genre but won’t make you jump like the first. There is violence and murder as befits the genre, and I liked the tension and anticipation that builds between events.

I enjoyed this book in a different way to the first due to the change in perspective and my greater understanding of Mildred’s background. This time I was waiting for her to act and wondering how she would wreak her revenge.

In the final third of the book we are introduced to a new character Andrew and it isn’t clear until the very end what significance he may have. I can’t wait for book 3 to find out more…

Are you as excited as I am about this next leg of Michael Clark’s multi-book tour? This time I am thrilled to share Dead Woman Scorned (The Patience of a Dead Man #2). Mildred is back and she’s looking for vengence!

Read on for an excerpt and a chance to win an amazing giveaway!

Dead Woman Scorned (The Patience of a Dead Man #2)

She’s back, and they’ll regret what they’ve done.

Mildred Wells had a miserable life that carried over to a lonesome death. In the end, they betrayed her–played her the fool.

She was the last to know, but there’s still time to catch up. She’ll formulate her painful plan as they live their lives in blissful ignorance.

With no more family, only vengeance drives her; in fact, it’s all she has. She would have rather rested in peace, but for Mildred, dying isn’t so easy

October 1971—One year before the Open House

(at the end of The Patience of a Dead Man, Book One)

Tim Russell banged his palm against the steering wheel in frustration—he’d forgotten his wallet. He wondered for a second if he really needed it before tomorrow, then looked at the gas gauge—near empty. Not even enough gas to make it to Holly’s house in Laconia. He stepped on the brake and pulled over to the side of the dirt road to make a U-turn, then hesitated.

It shouldn’t be a problem—to simply turn around, drive the quarter-mile back, walk into the house and retrieve the wallet—but it was undeniably harrowing even though their struggles with the murderous Mildred Wells were over. They’d beaten her, and she’d been taken away weeks ago, but even so, Tim’s stress level was off the charts as he worked alone each day, watching over his shoulder, restoring the old house as fast as he possibly could.

He looked back before making the turn, his heart picking back up to the level it had maintained the entire day. Here I go–I’m going back in, he thought, as he postponed thoughts of the cold beer waiting for him at the convenience store a mile down the road. Best to hit and run. He stepped on the gas and made the turn, never taking his eyes off of the house and, more specifically, the turret, his designated office space during the reconstruction–the room where he’d left his wallet.

In seconds he was inside the front porch, opening the front door, faking as though there was nothing to be afraid of. Once inside, he noticed that it seemed very dark in the kitchen. It was late May, and the longest day of the year would be here in less than a month. Sunset should be at around 8 pm today, with the twilight keeping things well lit for another half-hour at least. Strange. He turned to look out the kitchen window.

It was pitch black outside, and his truck was already gone.

In a panic, he spun for the porch, deep down, becoming aware that forgetting his wallet was the greatest mistake of his life. The smell hit him right then, and he wondered why he hadn’t noticed it sooner. The front door was closed and locked, even though he’d left it open on purpose. He grabbed the knob and began to work it when three flies landed on his hand and wrist. No. She must be close. Tim turned to the dark dining room to protect his back. Mildred Wells stood in the far corner, motionless.

Michael Clark was raised in New Hampshire and lived in the house The Patience of a Dead Man is based. The bats really circled the rafters of the barn all day long, and there really was a grove hidden in the forest. He now lives in Massachusetts with his wife Josi and his dog Bubba.

The Patience of a Dead Man, Dead Woman Scorned & Anger is an Acid are his first three novels.

What makes this tour extra special is that it’s part 2 of 3! This book is the second in a trilogy, best read as one big, terrifying story!

Here are the details for the last tour!

Anger is Acid (The Patience of a Deadman #3): November 30th – December 4th

Giveaway: To win print copies of the entire trilogy (US Only), or a print copy of The Patience of a Dead Man (International), click the link below! 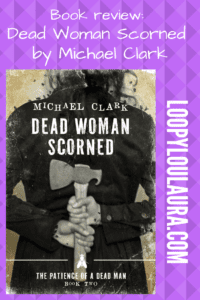