The German Girl, by Lily Graham 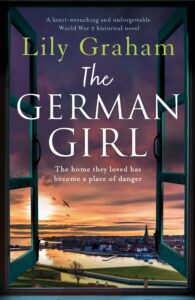 1990s Sweden: Ingrid moves home to care for her aged grandfather. He has early dementia and is confused, leading him to reveal that he once had a twin sister…

1930s Germany: Asta and Jurgen are twins who grew up in Hamburg. But their lives changed forever when the Nazis take power in 1933 and Jewish communities are persecuted. Their parents are arrested and the twins go on the run towards the Danish border but the Nazis remain hot on their heels…

The original title for The German Girl was The Flight of Swallows and I truly think it should have kept it due to the link with the twins’ surnames and their flight from danger. The original title was poetic and evocative of the plot and I hope it is reinstated.

This book is terrible (in a good way) and beautiful. The sense of anticipation waiting for the bad events to take place was completely compelling. Yet I also had hope, that perhaps the twins were merely separated, that the kindness and goodness of some people would prevent the Nazis’ cruelty. The only thing I didn’t like was a spot of non linear narrative which I felt was unecessary as it all caught up a few chapters later.

The twin characters are wonderful. The honesty and humour of their childhood sharply contrasts with the devasting events as the Nazis take power and measures to destroy the Jews begin to gain momentum. The racism elicits a revulsion from the reader and a heartbreaking inevitability as we know that this was the beginning of the Final Solution which caused the deaths of millions.

I was particularly interested in the setting of the Nordic countries as they are an area I don’t know much about historically. It has also been under-represented in the books I have read about WW2 and the Holocaust.

The German GIrl was a wonderful historical novel and I loved the development of the main characters against the unusual setting of the Danish border during Nazi occupation. 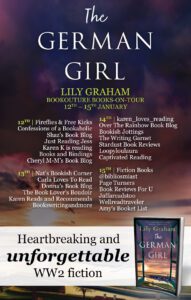 ‘Our parents were taken. And if we go home, the Nazis will take us too…’

Hamburg 1938. Fifteen-year-old Asta is hurrying home from school with her twin brother Jurgen. The mood in the city is tense – synagogues have been smashed with sledgehammers, and Asta is too frightened to laugh as she used to.

But when she and Jurgen are stopped in the street by a friend, her world implodes further. Her Jewish parents have been dragged into the streets by German soldiers and if she and Jurgen return to their house, they will be taken too.

Heartbroken at the loss of her parents, Asta knows they must flee. With her beloved brother, she must make the perilous journey across Germany and into Denmark to reach their only surviving relative, her aunt Trine, a woman they barely know.

Jammed into a truck with other refugees, Asta prays for a miracle to save herself and Jurgen. Crossing the border is a crime punishable by death, and what she and Jurgen must embark on a dangerous crossing on foot, through the snowy forest dividing Germany and Denmark. And when barking dogs and armed soldiers find Jurgen and Asta escapes, she must hold on to hope no matter what. One day she will find her twin, the other half of herself. Whatever the price she has to pay…

A gripping and poignant read that will break your heart and give you hope. Fans of Fiona Valpy, Kristin Hannah and Catherine Hokin will be gripped by the story of a brave brother and sister seeking safety during one of the darkest times in our history. 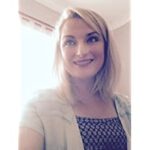 Lily has been telling stories since she was a child, starting with her imaginary rabbit, Stephanus, and their adventures in the enchanted peach tree in her garden, which she envisioned as a magical portal to Enid Blyton’s Faraway Tree. She’s never really got out of the habit of making things up, and still thinks of Stephanus rather fondly.

She lives with her husband and her English bulldog, Fudge, and brings her love for the sea and country-living to her fiction. 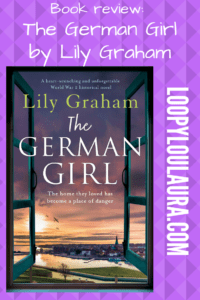