The Lies We Hide, by S.E. Lynes 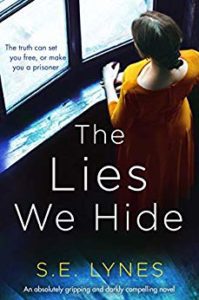 In the present day, Nicola is devastated by her mother’s death and her thoughts dwell on her childhood and the abuse that her mother endured. We are then shown the family’s escape from the violence but then her brother Graham’s life breaks down as a result of drug addiction and his actions land him in prison.

However, it emerges that Nicola, Carol and Graham have all been keeping secrets and it is time for the truth to be revealed…

Part one of the book was absolutely compelling. I loved the representation of Carol as a victim and survivor which I found utterly gripping, feeling raw and honest to me as a reader. The fear of what will happen and anticipating the imminent danger of a beating is palpable and we are in the moment with Carol. Equally, her guilt at leaving her husband and hope for a better relationship with him is something that we hear time and again from abuse victims so felt very real.

Parts two and three cover Graham’s descent into addiction and then his rehabilitation in prison. I’ll be perfectly honest and say I did not enjoy this as much despite the excellent writing. I wonder if it is the selfishness of his behaviour that made me switch off and this is due to the emotional pull I felt towards Carol, thinking she had suffered enough and not wanting her to have further pain.

Despite the serious topics covered in The Lies We Hide, S.E. Lynes manages to include love and humour as well. The introduction of prison chaplain Richard and his story, looking for redemption and finding it through his interactions with Graham, is gentle and full of hope. The overwhelming love of a mother for her children and the need to protect one’s family radiates through the book.

Take a look at my review of The Women 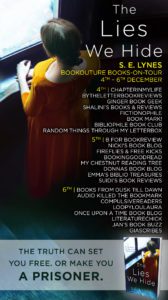 The truth can set you free, or make you a prisoner…

Thirty years ago, Nicola Watson lived with her parents and older brother in a respectable suburb. At ten years old, she didn’t yet understand why her stomach tightened when she heard her father’s heavy tread as he returned home late at night, or why it made her brother Graham’s stammer get worse, or why one night her mother Carol woke them both, wide-eyed and whispering, and took them out of their home and into the unknown.

Now a successful lawyer in the city, with a life poles apart from her dark beginnings, Nicola has returned home for her mother’s funeral. But as she stands in her mother’s house, remembering the woman who sacrificed everything for her children, Nicola has to confront the guilt that she feels for leaving her family behind. And the belief that she played a part in the events that led to her brother going to prison for murder.

All Carol wanted was to protect her children, but escaping her husband was only the beginning of the story. And when Nicola learns the truth of what her mother did, it will change everything she thought she knew about herself and her family.

A gripping, emotional story of family secrets, and the strength of a mother’s love in the darkest times. The next powerful read for fans of The Silent Wife, Kerry Lonsdale and Emily Bleeker. 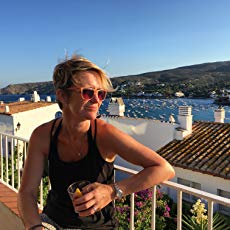 Amazon best selling author of ‘intelligent and haunting’ psychological thrillers VALENTINA, MOTHER, THE PACT, THE PROPOSAL and THE WOMEN.

S E Lynes is a writer, tutor and mentor. Formerly a BBC producer, she has lived in France, Spain, Scotland, Italy, and now lives in Greater London with her husband, three kids and her dog, Lola. 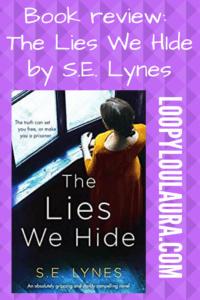