Dummies and other dependencies

I hate dummies. But I don’t judge other mums for using them. Well except for the mum of the 5 year old child walking to school this morning with one in his mouth. Her I judged 🙁

The latest thinking on dummies is that they are an aid in the prevention of cot death. It can however interfere with the development of the muscles necessary for eating and speech.

The choice is yours after weighing up the pros and cons in tandem with consideration of your personal circumstances. A bit of peace and quiet is VERY tempting but be prepared for the battle to get rid of it when the time comes. I’d argue that dummies are easier to give up than thumb sucking: you can’t get rid of a thumb!!!

Matthew sucked his thumb rather than a dummy and had an obsessive dependency on his comforter. Here is a picture of his loved version versus the bright lovely thing it once was: 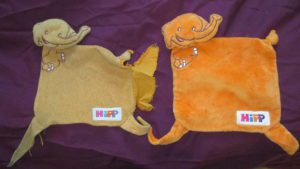 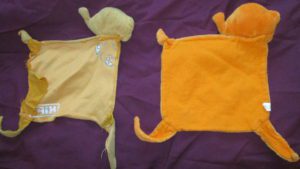 (No promotion intended: he wanted the freebie from a baby club, not one of the ones we bought, typical!)

I started off with good intentions, it was only to be used at night to help him sleep. When I became pregnant with Anya I got desperate and allowed him to have it whenever he wanted it, including taking it to preschool. THIS WAS NOT GOOD! It led to tantrums when he couldn’t have it or if we forgot it. There would be a meltdown if another child went near it. The comforter became more and more bedraggled so it was in danger of disintegrating completely. Here is he aged 2 1/2: 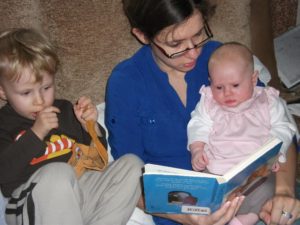 We then created the rule that it was not allowed outside the bedroom. This led to Matthew spending a lot of time in his room and we hardly saw him 🙁 Matthew’s thumb sucking had also become almost constant and I was desperate to stop this so that he wouldn’t be mocked at school for being a baby.

It was a very hard time but looking back I’m so glad we all coped.

My parents had frequently bribed me with cash incentives to stop sucking my thumb when I was a child but it never worked until i made the decision for myself aged 13 (!) Matthew was nowhere near as bad and I am very proud of him for stopping with so little fuss.

Anya and Zach don’t suck their thumbs and have never used a comforter despite my efforts in the early days to try to reduce their attachment to me. Both of them fall asleep on their own and Anya is quite resilient as she awaits starting school in September in a way that Matthew never was. Zach is a very happy baby and I am pleased with the decisions I have made.

I have learned that children need clear boundaries and rules but I found out the hard way. Good luck to any new mums facing the dilemma of dummies, comforters, music boxes and anything else which offers brief moments of sanity in the extraordinary world of parenting!