Taken to the Grave, by M.M. Chouinard 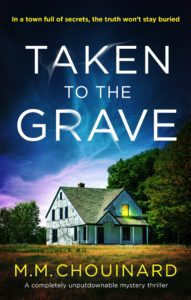 A spate of murders occur in rapid succession and Jo Fournier is desperate to catch the killer. All of the victims have a link to the biology department of the university and there is no shortage of suspects but alibis and motives prove trickier to uncover, making it difficult to determine guilt.

We see glimpses of the killer’s perspective throughout the book but not regularly spaced so our main focus remains on Fournier and her team’s investigation.

Meanwhile Jo’s father has been diagnosed with cancer and needs treatment. Her antagonistic relationship with her sister develops through the book and we see more of her personal relationships and cultural background.

Jo’s personal life becomes embroiled in the case as one of the supects lost his wife to cancer while researching treatments courtesy of his biology specialism, but was unable to pay for health care because he lost his job.

There are a few grisly bits in the book and we do see the suffering of some of the victims which is desperately sad to read. The choice of deaths have been carefully planned and are very clever. I had no idea on the killer’s identity!

Like M.M. Chouinard’s previous book, there is a big twist at the end. Jo faces the moral dilemma of understanding the reasons for the murders but being unable to condone them: two wrongs don’t make a right!

Read my review of The Dancing Girls 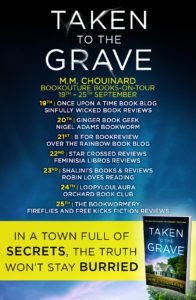 Title:  Taken to the Grave

In a town full of secrets, the truth won’t stay buried…

When a girl’s body is discovered in a park in the sleepy Massachusetts town of Oakhurst, local detective Jo is shocked to the core. Because the girl is the second innocent victim to turn up dead in three days. And just like the first, a tarot card has been left by the body. The meaning of the card: betrayal.

After uncovering a series of threatening messages targeting the girl, a student at the university, and the first victim, her teacher, Jo thinks she’s locked the killer in her crosshairs. The primary suspect is a volatile ex-military student with an axe to grind for failing grades, and the frightened town is out for his blood. But the next day, a much-loved member of the community is found dead in her home, a tarot card in her mail. There’s no clear motive to link her death to the others, and the message on the card this time is even stranger: domestic bliss.

With a fourth body and card appearing the following day, Jo knows she’s running out of time to crack the code and bring the killer to justice. And the pressure only gets worse with heart-breaking news about Jo’s father forcing her to choose between helping her family heal or the victims’ families get justice. Can Jo find the twisted murderer sending the town into a panic before another life is lost? Or this time, will the dangerous killer find her first?

A completely addictive detective thriller that will keep you guessing into the early hours of the morning. If you love Kendra Elliot, Melinda Leigh and Lisa Regan you’ll love Taken to the Grave. 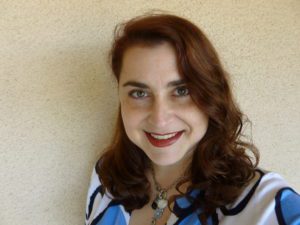 M.M. Chouinard’s first fiction story was published in her local paper when she was eight, and she fell in love with Agatha Christie novels not long after. While pursuing a Ph.D in psychology and helping to found the first U.S. research university of the new millenium, the stories kept rattling around inside her skull, demanding to come out. For sanity’s sake, she released them. She’s currently at work on her seventh novel. 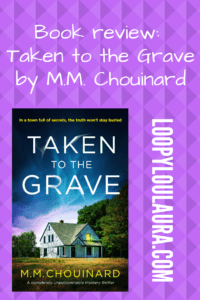