Vegan sausage rolls and a world that mocks plant eaters

Veganism seems to be a threatening concept. I have come to this conclusion based on the vitriol that has been spouted in the media over the last few months. 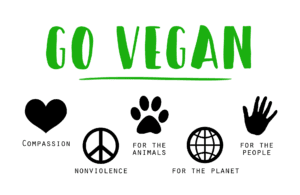 I think the militancy and assumed superiority of some vegan activists has contributed to this. It causes a knee jerk reaction from the mainstream that is similar to that experienced by early feminists and ethnic minorities fighting for equality. There are certainly similarities between these causes, the methods they use to generate debate and the challenges they face.

I am not a hard line political person on any subject. I think that each and every one of us is entitled to make decisions about our own bodies without fear of violence, mockery or compulsion.

William Sitwell, a respected restaurant critic, in a private email wrote “How about a series on killing vegans, one by one. Ways to trap them? How to interrogate them properly? Expose their hypocrisy? Force-feed them meat?”

Piers Morgan responded to the launch of the Greggs vegan sausage roll with the following tweet:

Nobody was waiting for a vegan bloody sausage, you PC-ravaged clowns. https://t.co/QEiqG9qx2G

I have just started out as a vegan. I do not like animals. I’m not really keen on people either! I have decided on it because I don’t agree with the suffering that humans inflict on other species. I can no longer plead ignorance or forget that animals are treated appallingly for our benefit. I don’t want that on my conscience, on my skin or in my food.

I am not a PC ravaged clown who should be force fed meat. I am simply a human trying to make the world slightly kinder.

The issue is not about whether companies are right to offer vegan alternatives. It is about having the opportunity to eat a meal with your family, to make choices about what you eat without having to make a big deal about it.

As someone who is wheat free due to allergies, there is always a lot of stress when eating out. The vegan sausage roll won’t solve that for me but it will improve the eating out experience for many others. Having to plan ahead to make sure there will be something on the menu, worrying that the food will be out of stock, being made to feel awkward for checking ingredients, all contribute to eating out being unenjoyable 🙁

I understand that there are critics of veganism who complain about the pesticides used to kill insects in order to protect crops. They are absolutely right, but we are not purposefully breeding them, treating them inhumanely and then murdering them. New methods for all farming techniques need to be developed and this will come with time as our planet struggles to cope with rising populations and increased pollution.

One other problem I have identified is that vegan products try to resemble meat, making it appear that meat is the ideal to try to replicate. I would argue that this is because so few of us start our lives as vegans so we rely on the familiarity of products. In the future, if vegans continue to make an impact on our food and farming industries then new foods and practices can change this. Until then, I want to fit in with my vegan sausage roll (mince/burger/sausage/milk/cheese/other animal derived product that is the norm).

On a personal note, I would like to thank brands for raising awareness of veganism. It isn’t a fad, it will only proliferate over the years. Now please make more products that are wheat free and meat free for me!

Becoming vegan is not the end of the story. It is the start of a brave new world where humans and animal coexist in a positive relationship. Accepting veganism as a way of life and being tolerant of our fellow humans is perhaps the first step… 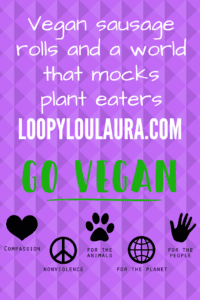