Her Frozen Heart, by Stacy Green 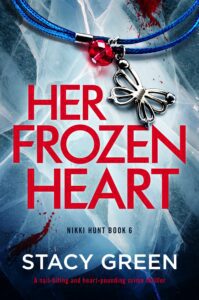 FBI Agent Nikki Hunt is getting ready for Christmas with her family when she gets a call that a body has been found in a frozen lake. The victim is perfectly preserved but her hands and feet have been removed. The only suspect is her boyfriend but the dismemberment suggests a confident killer rather than a teen…

Her Frozen Heart is the 6th book to feature Nikki Hunt. There are several plot developments from earlier books that play a significant role in the main characters’ current lives so I would recommend reading the books in order or treating it as a stand alone.

The prologue is hugely emotive as it shows us Kesha begging for her life. This really catches the reader and throws them straight into the action. We then skip ahead to the discovery of her body which is heartbreaking after her desperation to live.

The pace of the plot developments is quite speedy but delivered through chapters which are reasonably long to show the thoroughness of Nikki’s investigation. A young man’s disappearance and the discovery of a mass grave makes the case more complicated and adds new dimensions.

The majority of the book is written in the third person from the police perspective. However, there are some chapters that show a past timeline which has an uncomfortable and increasingly sinister atmosphere. The interactions between Nikki, her family and colleagues all contribute to strong relationships which underpin the investigation and contrast against the dark atmosphere.

Her Frozen Heart is an entertaining and dramatic detective thriller.

I have previously reviewed One Perfect Grave, The Girl in the Ground and The Trapped Ones by Stacy Green. 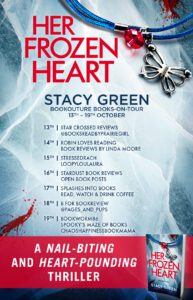 The girl’s pretty face was relaxed, snowflakes settling on her cheeks as they began to fall over the quiet frozen lake where she’d been found. She could have been sleeping… but her empty eyes and the blooming bruises around her neck told a different story…When Special Agent Nikki Hunt receives a call on Christmas Day, she knows it can’t be good news. Seventeen-year-old missing teenager Kesha Williams has at last been found… her body floating in an icy forest lake, miles from her hometown.As Nikki rushes to the scene, she’s chilled to see the past repeating itself. Kesha disappeared from the mall where Nikki’s own little girl was targeted the year before. With Kesha’s grieving parents desperate for answers and the media out for blood, Nikki promises she’ll find Kesha’s killer no matter what it takes.Local police are convinced it was Kesha’s boyfriend, who was spotted disappearing from security cameras that day at the mall, but Nikki isn’t so sure. The dense marshes and unstable ground around the crime scene mean it’s nearly inaccessible from the road. Whoever took Kesha is a local, and this probably isn’t his first kill.Nikki’s worst fears are confirmed when the team find another grave on the shore – a second teenage girl, her body wound in a brightly coloured beach towel. Suddenly on the hunt for a serial killer, Nikki knows that an early break is the key to solving this case. But as the body count rises, will Nikki be able to find Kesha’s killer… or will he find her first?An unputdownable thriller that will keep you up all night! Fans of Lisa Regan, Kendra Elliot and Robert Dugoni will absolutely love this gripping read. 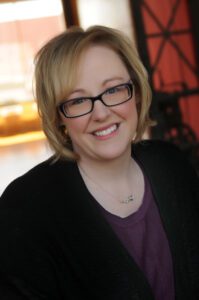 Stacy Green is a USA Today best-selling author of more than a dozen mysteries and thrillers. Her books include the award-winning Lucy Kendall series, the Cage Foster series, and the USA Today best-selling Nikki Hunt series. Stacy has bachelor’s degrees in Journalism/Mass Communication and Sociology from Drake University. She’s a member of Sisters in Crime, International Thriller Writers, and Mystery Writers of America.

Stacy lives in Iowa with her husband, daughter, and fur babies. 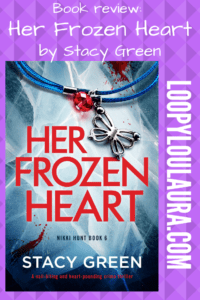