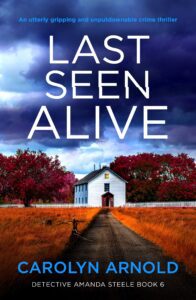 Amanda gives an ex a second chance. they head to his bedroom but their passion is killed in an instant. On the bed is a body. Logan claims it is his estranged wife but her ID says otherwise. Can Amanda trust her instincts that her lover is innocent or has she hooked up with a killer?

Last Seen Alive is the 6th book to feature Detective Amanda Steele. There are mentions of events from previous books and character development plotlines but no spoilers.

As with the earlier books, it is Amanda’s character that drives the plot. She is first on the murder scene, involved with the main suspect and convinced of his innocence. Her senior officer thinks she is too personally involved in the case to act objectively but her tenacity reveals discrepancies in the evidence.

Her partner Trent backs her up all the way. He is loyal and a little bit in love with her. I felt his heartache that she has chosen Logan and the case eats away at him because he is friends with the victim’s sister.

Most of the novel is written in the present day but there are some flashbacks to show the victim’s past. The plot is delivered through reasonably short chapters which maintains a fast pace as Amanda hunts for the truth.

Last Seen Alive is a dramatic detective thriller with a strong lead character.

I have previously reviewed books 1-4 in the series The Little Grave, Stolen Daughters, The Silent Witness and Black Orchid Girls (off to find number 5, not sure how I missed it!) 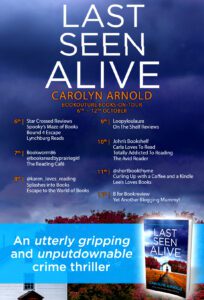 The woman lies so still as her blood soaks into the soft bedcovers beneath her. A tear runs down her face as she looks at the wedding band on her finger. She had loved her husband so much…

When Detective Amanda Steele unexpectedly reconnects with an old boyfriend, the last thing she expects to see lying on his bed is the dead body of his wife, Claire, who walked out on him four years ago.

Logan begs Amanda to believe he’s innocent. But she doesn’t miss the gun on a nearby table, and she’s torn when forensics reveal that not only was this the murder weapon, but Logan’s fingerprints are all over it… Could he have been framed? Or is he using his connection to Amanda to get away with murder?

Determined to uncover the truth, Amanda retraces Claire’s last steps and finds that she visited her best friend the day before her death. But Amanda is devastated to discover that the friend died in a car accident just hours after meeting with Claire. What deadly secret connected them, and could more women be in danger?

But the killer is closer than Amanda realizes, and when her beloved daughter, Zoe, is threatened, she’s suddenly in a race to find the final clue before the person she loves most pays the price… 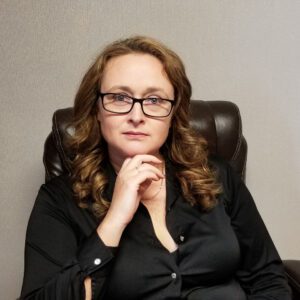 CAROLYN ARNOLD is an international bestselling and award-winning author, as well as a speaker, teacher, and inspirational mentor. She has several continuing fiction series and has many published books. Her genre diversity offers her readers everything from police procedurals, hard-boiled mysteries, and thrillers to action adventures. Her crime fiction series have been praised by those in law enforcement as being accurate and entertaining. This led to her adopting the trademark: POLICE PROCEDURALS RESPECTED BY LAW ENFORCEMENT™.

Carolyn was born in a small town and enjoys spending time outdoors, but she also loves the lights of a big city. Grounded by her roots and lifted by her dreams, her overactive imagination insists that she tell her stories. Her intention is to touch the hearts of millions with her books, to entertain, inspire, and empower.

She currently lives near London, Ontario, Canada with her husband and two beagles. 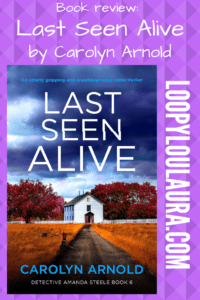