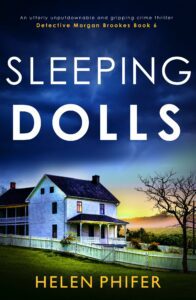 Morgan Brookes is called to a potential crime scene. A neighbour has complained of a terrible smell and when the police enter they find the body of Shirley. At first, natural causes are believed to have caused the death but Morgan thinks the flat has some odd clues…

Sleeping Dolls is the sixth book to feature DC Morgan Brookes. I have previously reviewed One Left Alive, The Killer’s Girl, The Hiding Place, First Girl To Die, and Find The Girl.

Morgan and her colleague and boyfriend Ben lead the investigation into the death when it becomes clear that the woman was murdered. They also have a new boss to contend with. The forensic details are gruesome as Shirley’s body has been lying there for days. However, it is appropriate to the genre and style.

Meanwhile Morgan tries to work out the significance of the covered mirror and stopped clock. Then another body is found and the weapon links to the first crime. The plot in the present day following the investigation is interspersed with chapters set in 1989 about a boy which sets off the readers’ imaginations as we try to make connections.

The writing is fast paced and the chapters are quite short to keep the momentum. Plot twists and red herrings keep the drama and suspense maintained until the end. Morgan and Ben’s relationship has progressed since the last book which will keep fans of the series happy. 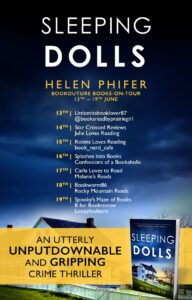 The beam shines around the dark room, lighting up the woman in sky-blue pyjamas lying on the couch. But she doesn’t wake under the bright glow, she isn’t sleeping at all…

When a concerned neighbour reports a woman missing, Detective Morgan Brookes squeezes through the stiff front door to find the woman dead. At first, the case appears unsuspicious, but something about the scene unsettles Morgan. Every clock in the house has been stopped, every mirror covered, and the woman seems physically unharmed except for one missing lock of hair.

Shirley Kelly was loved by her friends and hated by her ex-husband and his new wife, but they have an iron-clad alibi, and Morgan is certain that the scene-staging holds a vital clue. She’s devastated to be proved right when another woman is killed, and her home arranged in the same way. The only difference is that the second victim has been stabbed, using a knife from Shirley’s own kitchen…

The team can’t find a connection between the two women, but Morgan is sure that there is a deadly pattern to the killer’s actions. She hunts through each woman’s past until she finds the link: years ago, they both worked for a woman called Evelyn Reynolds, before tragedy struck her young family. But what has made them targets now? Morgan knows this twisted case is far from over, can she find the final clue before the clock stops for the next name on the killer’s list? 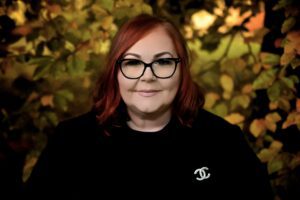 She lives in the busy town of Barrow-in-Furness surrounded by miles of coastline and a short drive from the glorious English Lake District.

Helen loves reading books that scare the heck out of her and is eternally grateful to Stephen King, Dean Koontz, James Herbert and Graham Masterton for scaring her senseless in her teenage years. Unable to find enough scary stories she decided to write her own and her debut novel The Ghost House released in October 2013 became a #1 Global Bestseller.

She has written over twenty books in various genres, and you can follow her over on Instagram https://www.instagram.com/helenphifer/

Or find her over at www.helenphifer.com 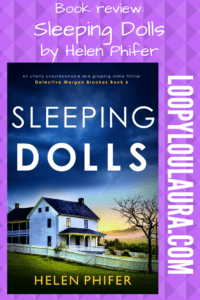